Episode 1: Waking Up Inside and Outside 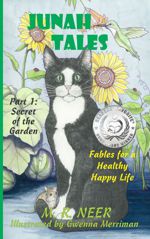 Here is Episode 1 of Junah Tales.

Waking Up Inside and Outside.

Junah wakes up and explores his world.

Background: Junah Cat has been challenged by the mysterious three sisters to find the secret of the garden. He teams up with Maureen “Mo” Mouse to explore the garden, finding great truths to purr about along the way. 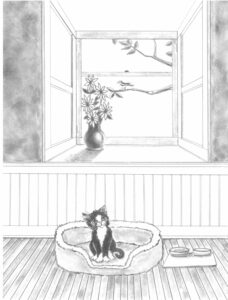 Junah Cat was not born in the House by the Garden. He was born somewhere else. But when he was born, the first thing he remembered was hearing sounds, kind of a vibration that woke him up. He knew he was alive, but his eyes weren’t open at first. All he could do was eat and sleep. But once his eyes opened, he started finding out about his body and the world around him.

He also learned about the world outside him.  He liked seeing new objects, hearing the many sounds around him, climbing on chairs and beds, and especially smelling foods and flowers.  He also liked eating, sitting in the sun, and chasing things that moved. He found out that he liked stretching in all kinds of postures as well as licking his paws to clean his ears. Of course, he found out about jumping, and pouncing, and even falling. Luckily, he never got hurt.

Life finally got to the point where he wasn’t a kitten any more. Junah was a bigger cat, ready to explore the world.

Then one day, the three sisters came to his birthplace. Sister Sara played some wonderful music on her guitar; Sister Laka sang a flowing melody, and Sister Duma murmured quietly in a low voice. It reminded him of the first sounds he heard, the ones that woke him up. They took Junah home to the House by the Garden. That’s when the adventures really started!

Junah’s purr:  Knowledge is gained from inside and outside.